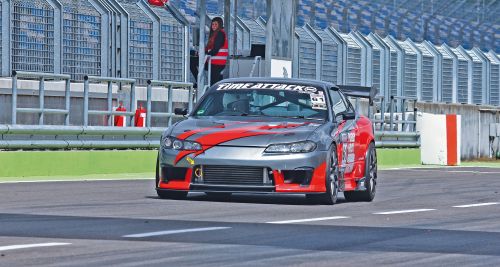 Motor sports have always been a development ground for engineering technicians and engineers. The Time Attack race car is a good example. The car, a Nissan Silvia, has been set up for racing in the past 8 years and continuously developed. In 2016 the car won the German Time Attack Masters in the PRO class with 3 wins in 4 races. Numerous ifm sensors realising different applications and functions are installed in the car. 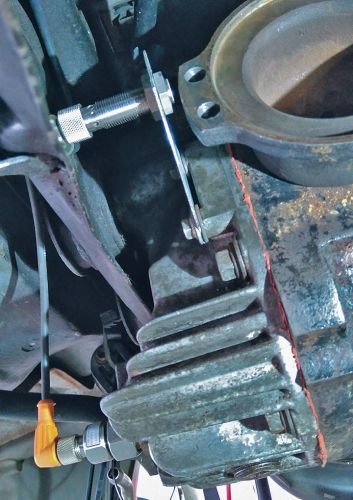 Type TM51 and TM99 temperature sensors monitor the oil temperatures in the gearbox and rear-axle differential and give a warning if the power train overheats. Here temperatures of up to 120°C or 140°C are possible during the race which cause considerable wear. The temperatures are indicated
on a small display from tecomotive (2x PT100, 2x 0-10V inputs) in the field of view of the driver. 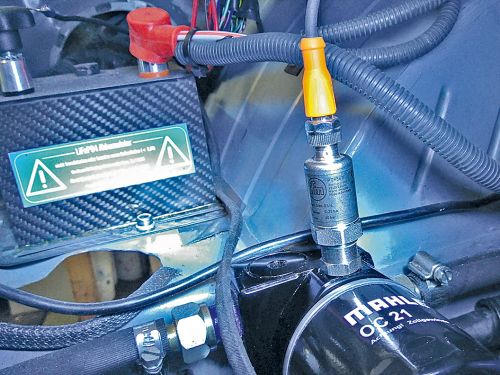 A PT9543 measures the engine oil pressure on the oil filter housing. The analogue output is connected in parallel to the tecomotive display and the engine control unit (ECU).
An individually drawn up characteristic curve (oil pressure depending on the engine speed) is saved there. If the value falls below it, the controller activates an engine speed and boost pressure limiter to protect the engine against bearing damage, for example. This happened already during a test drive: Low oil level at high lateral g-force caused the engine to be switched into limp mode. Data recording showed a sudden decrease in oil pressure for a few tenths of a second, measured by the PT pressure sensor.

The intake air heats up considerably due to the compression procedure in the turbocharger.
To cool it down because of the performance a water/alcohol mix is sprayed from the windscreen washer reservoir onto the charge air cooler installed on the vehicle front depending on the air temperature and the accelerator pedal position. 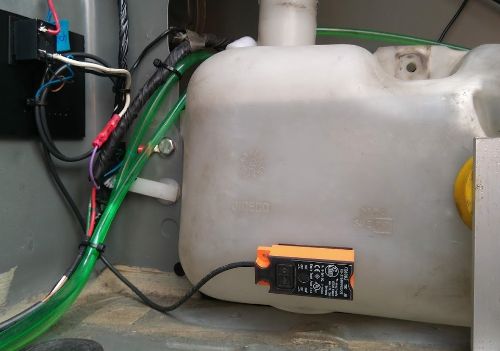 A KQ6002 installed at the outside of the tank is connected between the ECU and the windscreen washer pump by means of a relay and protects the pump against running dry. 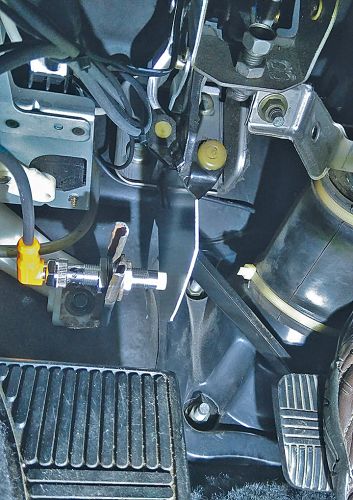 The background of the IF Kplus inductive sensor installed on the clutch pedal is saving time when changing gears by means of flat shifting. The turbocharger rotating at up to 160,000 rpm loses the largest amount of its speed if the throttle valve has to be closed and a divert-air valve has to be opened
during the gear-changing process to blow off the boost pressure building up in front of the closed throttle valve. If after the gear change the throttle valve is opened again rapidly when the accelerator pedal is activated, the boost pressure has to build up again which costs a lot of valuable time in
racing.

Ignition is interrupted when the sensor is damped by an aluminium target installed on the clutch pedal. That means that the power train is free from load during this moment although the pedal is still pressed to the metal. The throttle is wide open and the turbocharger loses only little speed.

Since you have to be extremely careful with rear wheel drive on wet road surface, the driver relies on a programmable traction control of the retrofitted ECU.
It compares the wheel speed of the front and rear axles and reduces the power by means of the ignition angle when the rear axle rotates faster than the front axle. The sensitivity can be set by means of a potentiometer. The signal of the anti-lock braking system sensors on the front axle is used to detect the wheel speed. This signal on the rear axle is, however, too sensitive. An M12 inductive sensor detecting the speed of the drive shaft provides the remedy. The frequency which is different against the front axle can be easily taught in the controller.