The first #ifmHackathon was a great success

On 8 June 2018, exactly at 17:00 h, the participants arrived at the headquarters in Bechlingen. After short safety instructions the ifm group of companies was presented to give the participants a brief insight into the company. A tour through the production site of ifm efector followed. This opportunity was taken by the students to get some details on "packaging" by asking clever questions. 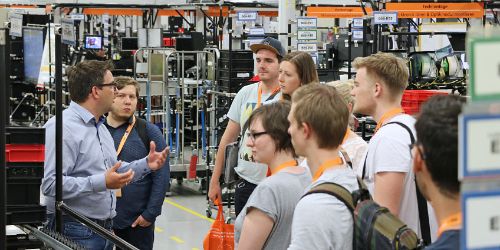 With all these impressions the participants gathered at the prepared event area. The final task was presented here. When the participants had divided into four groups, the competition started at exactly 19:30 h. Right from the first minute all groups worked on the task with a lot of motivation, creativity and team spirit. Especially the atmosphere created for the event with music, light show and attractive furniture was well suited for working. The mentors from ifm and the Institut für Weiterbildung, Wissens und Technologietransfer (Institute for Qualification, Know-how and Technology Transfer, briefly IWT) were always available for questions. During two breaks with games organised by the ifm trainees, the participants could distract themselves and clear their mind. A room for relaxing and eating was also available for the participants.

On Saturday at 8:00 h in the morning the results were presented to the jury, consisting of Klaus Unger and Bernd Hausler from ifm as well as Prof. Dr. Lars Ruhbach and Kris Dalm from IWT. The participants found new realistic approaches for manual packaging which are to be implemented in the framework of a master's thesis.

After their breakfast together the award ceremony with the Chairman of the Board of Directors, Mr Martin Buck, and Prof. Dr. Ruhbach followed. The group of Dr. Rummens & Partner won the competition with a combination of "pick by light", "motion tracking" and "augmented reality" as well as an implementation plan including a pre-investment analysis. 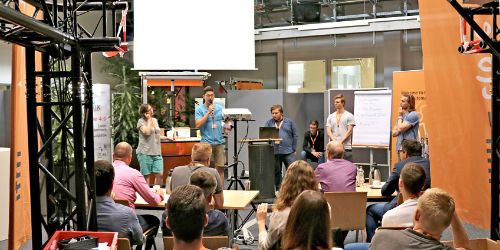 What is a hackaton?

This type of competition is a new approach to tackle challenges and can be considered to be a success. Last but not least thanks to the great atmosphere ifm could become better known among students and possibly open the door for some prospective candidates.

In the name of the project organisation team, thank you very much to all supporters from the different departments of the company. Without them such an event would not have been possible.